There are so many connection types it can get very confusing quickly, don’t worry we feel your pain! By the end of this article we hope to shed some light on all the confusion. Since we are a company that builds custom computers, there are many different video card configurations possible with brands, number of cards and models. So it’s our goal to familiarize you with all the different port types that might be on your system. There are really only 4 ports types currently worth mentioning that you will see on the back of your system, so that’s what we’ll cover in this article. The 4 port types are: VGA, DVI, HDMI and DisplayPort.

The computers we sell have dedicated video cards (cards we install in the system to output video). These cards will contain multiple “output connections”. These outputs (which we will soon describe in detail) send a signal to your monitor through a cable that is attached. The monitor accepts that signal through an “input connection” on the back of the monitor. The monitor will have one or more input connections to accept a signal, only one input can be utilized at any given time, when there are multiple connections on the monitor they are just giving you multiple options to use depending on your needs. We’re seeing more and more as time goes on monitor manufacturers are dropping the older analog VGA connection types, instead going with all digital inputs.

VGA is an older analog connection type. It’s nearly extinct & most video cards don’t even include them as an output. Some of the lower priced cards we’ve offered still have them, but is not common. We don’t recommend using this connection type. VGA output connection ports on the back of your computer look like the picture below.

DVI is the most common type of video card output port of the past 20 years. There seems to be a push in the computer industry to slowly fade this one out, but this could take a very long time, especially on monitors. Most monitors manufactured in the past decade or more have a DVI input port, so because of this most video cards still have at least one DVI port. DVI & other digital input types we’ll describe below are interchangeable with each other via adapters, so if your computer has DVI ports and your monitors only have HDMI it isn’t a problem because they can be converted with an adapter or cable with DIV on one end and HDMI on the other end. DVI port outputs on the back of your computer look like the picture below. 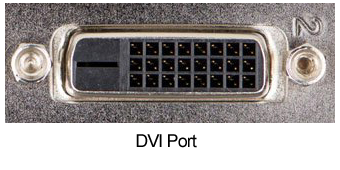 HDMI is another digital port type similar to DVI in signal, in fact the same digital signal is sent so they can be converted back and forth easily with adapter. HDMI is common on most consumer electronic devices such as Blu-ray players, video game consoles and TVs. HDMI ports are found on the back of most video cards that we use in our trading computers, this input port type is also very common on most monitors. The monitors we sell with our trading computer blundles have a DVI port and an HDMI port, either one can be used. Some of our video cards have a smaller version of HDMI called mini-HDMI. Don’t worry, we send with an adapter for each mini-HDMI port that convers it to standard size HDMI. Then you can just use a standard HDMI cable (that comes with the monitors) to connect you computer to your monitor(s). HDMI port on the back of your computer look like the picture below (notice the two angled notch’s in the corners, that’s an easy way to identify a standard size HDMI port). 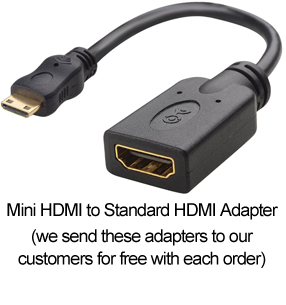 Yep, that’s not a typo – the word DisplayPort is spelled out as one word (no spaces). It’s the newest input type of these 4 listed, it’s a digital port just like DVI and HDMI. The mid-range gaming cards up to the high-end cards will have one or more DisplayPort output connections. Unfortunately, most monitors still don’t come with DisplayPort inputs, but with adapters DisplayPort can be converted to DVI or HDMI easily. DisplayPorts on the back of your computer look like the picture below (notice the angled notch in the corner, that’s an easy way to identify a DisplayPort). 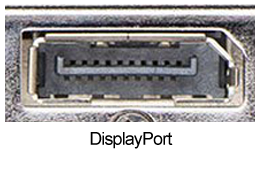 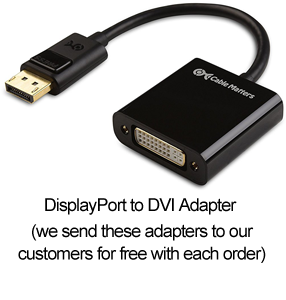 The next image shows the full rear view of our NVIDIA 710 GT card. This card has 3 ports total to connect 3 displays. Two of these cards installed in our trading computers will give you the capability to run up to 6 monitors. This is the card we use in the majority of our trading computers. It’s low cost and has all digital outputs. We include a Mini HDMI to Standard HDMI adapter (shown above) with each card.

The next image shows the full rear view of our NVIDIA 1650 GTX card. This card has 3 ports total to connect 3 displays. Two of these cards installed in our trading computers will give you the capability to run up to 6 monitors. We sell a lot of trading computers with one or two 1650 GTX cards, it’s a very popular card with our customers. We include a DisplayPort to DVI adapter with each card. 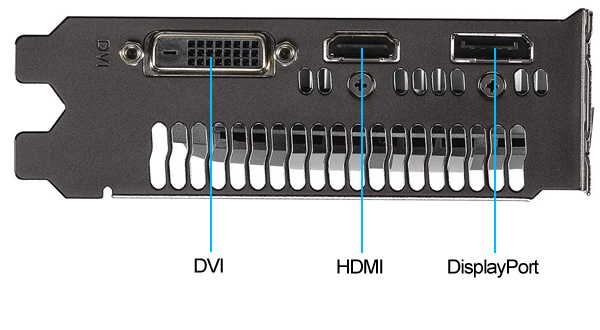 The next image shows the full rear view of our NVIDIA 1660 GTX card. This card has 4 ports total – 3x DisplayPorts and 1x HDMI. The specifications on this card allow for up to 4 monitors to be connected simultaneously. One common question we get is “do I need to connect all the monitors to all the ports?” No, you can connect as many or as few as needed, up to 4 displays per card. With two of these cards installed in a trading computer you can connect up to 8 displays, and remember that we do send with the DisplayPort to DVI adapters for free. 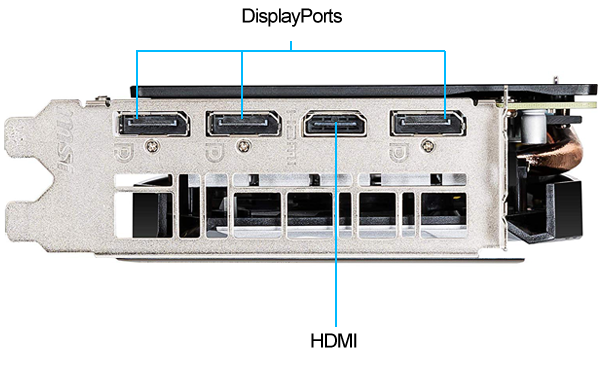 The next image shows the full rear view of our NVIDIA PNY Quadro P620 card. This card has 4 DisplayPorts. The specifications on this card allow for up to 4 monitors to be connected simultaneously. With two of these cards installed in a trading computer you can connect up to 8 displays, we also offer 3 of these cards for up to 12 monitor support. Each card supports four 4K displays at up to 4096×2160 60Hz resolution. Since the ports on the card are mini DisplayPort – four mini DisplayPort to standard DisplayPort adapters are included. 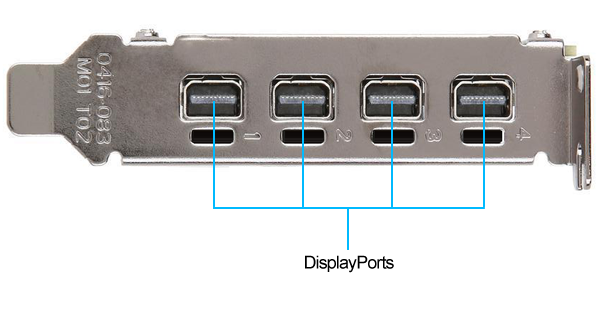 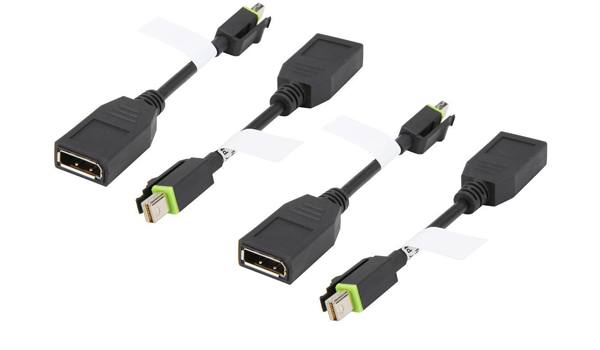 Some motherboards have integrated DVI, HDMI, VGA or DisplayPorts. These ports are built into the motherboard and use system resources (cpu, ram), that’s why separate “dedicated” video cards are preferred. Our systems have dedicated cards installed, these cards have their own GPU and RAM making the system perform much better than using the integrated ports.

The integrated video ports are located near the top as shown in the image. These ports won’t be used, so don’t plug your monitors into them.

The dedicated video card ports are located lower, below all the back panel motherboard ports. Depending on which video cards are installed in the system there can be any combination of DVI, HDMI or DisplayPorts. 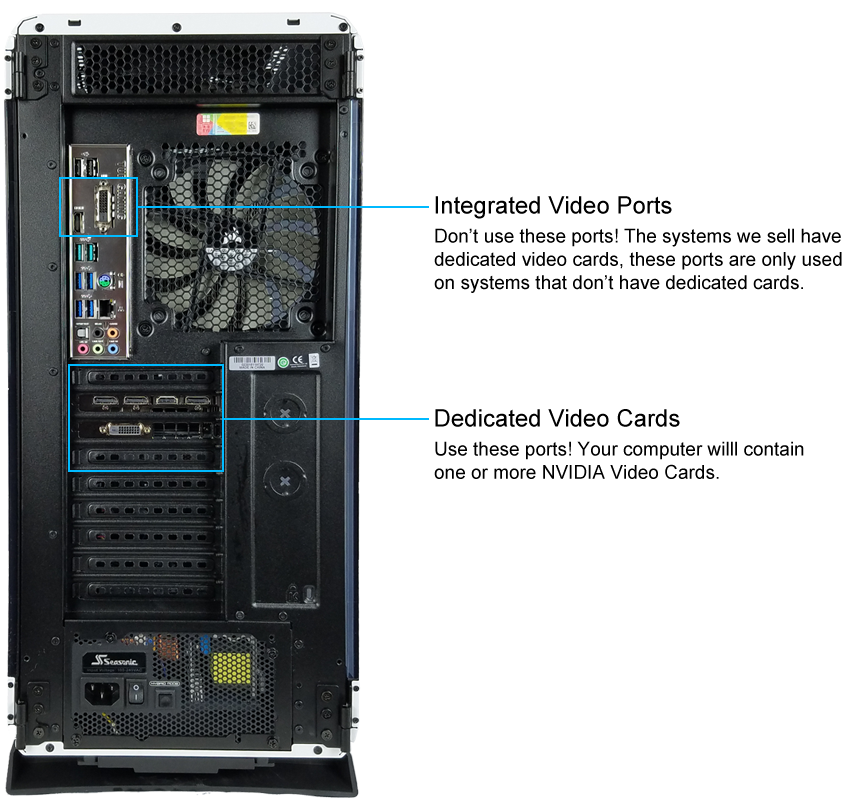